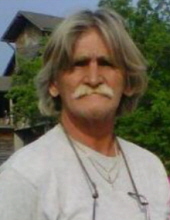 John was a hardworking man to say the least. He was in both the U.S. Marine Corps and U.S. Army. John had a passion for working on diesel boats, and he never went home without finishing a job. He held a special place in his heart for his wife, Leslie, and his daughter, Megan. He loved working with his best friend, Henry Canady, and they were a dynamic duo. John also found that motorcycles were a love of his life. John was a member of the Patriots Guard. There were many influences in his life, and, through them, he found the Masons. He poured himself into this, like he did with everything, and became a Master Mason in good standing at the James Island Lodge #396. As anyone can tell you, he could always be found in the yard. He loved working on his flowers and was always watering his yard.

John’s ashes will be spread in the Charleston Harbor, and he will be honored at the Beaufort National Cemetery.

Memorial contributions may be made to the American Cancer Society.

Expressions of sympathy may be viewed or submitted online at www.mcalister-smith.com. Arrangements have been entrusted to McAlister-Smith Funeral Home, 347 Folly Road, Charleston, SC 29412, (843) 614-8494.
To order memorial trees or send flowers to the family in memory of John McNeil Markert, please visit our flower store.