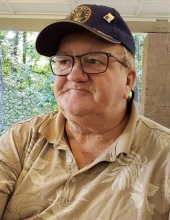 John retired after 20 years as a Fire Control Technician Chief in the United States Navy in 1988 and continued to work for the Naval Weapons Station as Naval Housing Manager. He was a longtime member of the Santee Cooper Bass Club. He enjoyed fishing, football, and having coffee with friends.

John was preceded in death by his wife, Hanifa “Nita” in 2009 and his younger brother David in 2017.

The family will receive friends on Friday, February 15, 2019 from 5:00PM to 7:00PM at McAlister-Smith Funeral Home, Goose Creek Chapel. In lieu of flowers, memorial contributions may be made to the National Kidney Foundation.

Expressions of sympathy may be viewed or submitted online at www.mcalister-smith.com.
Arrangements have been entrusted to McAlister-Smith Funeral Home, Goose Creek, 869 St. James Avenue, Goose Creek, SC 29445, 843-553-1511.
To order memorial trees or send flowers to the family in memory of John R Forsythe, Jr., please visit our flower store.