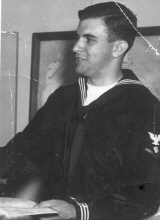 Tony Lavender, age 69, of James Island, SC, husband of Carolyn Wood Wash Lavender, died on Saturday, May 16, 2015. Born July 10, 1945 in Charleston, SC, he was the only child of the late Arthur Wayne Lavender and Caroline Badger Lavender. He was a US Navy Veteran and a former businessman who owned and operated several restaurants. Tony was a former General Sales Manager for the Chevrolet, Pontiac, Buick and Ford automotive dealerships. He retired from civil service as an operative agent. A member of Harborview Presbyterian Church in Charleston, Tony served in many capacities including leader of family ministry and lay leader. He introduced and organized the annual Ladies Valentine's Dinner and also cooked for various functions at the church for eight years. He was a former member of Bethany United Methodist Church where he was president of the Methodist Men. Tony was very civic minded and a member of numerous organizations including Lions Club of Johnston, SC where he served as president, zone chairman, and was twice awarded 'Lion of the Year.' He was a former president of Mt. Pleasant Lions Club also. Tony was a charter member of Fort Johnson Camp 1201 Son's of the Confederate Veterans where he served as First Lieutenant, Commander and treasurer. He was an Elk member of Charleston Lodge #242 where he served as lecturing knight and chaplain. Tony was also greatly involved in the Masons as a member of the James Island Lodge #396, and he served as Senior Deacon. He was a member of Scottish Rite and 32nd degree Mason, Eastern Star James Island Chapter #284, Noble Omar Shrine where he was past director and part of the Omar Temple staff and a member of the Hillbillies. He was a member of the Masonic Service Association. Tony was a member of the American Legion Post 147 in James Island and American Legion Post 166 in Goose Creek. He was part of the Tin Can Sailor Association in Goose Creek and Nationally. He volunteered at the Ralph H. Johnson VA Medical Center in Charleston. He is survived by his loving wife, Carolyn W. Lavender: two daughters; Kim and Katherine both of Hawaii; two step-sons: Tim Wash and his wife Cherie and Chad Wash, all of Charleston, SC; step grandson: Timothy Wash of Lancaster, SC: sisters in law Marcia Wood of Orangeburg, SC and Ruby Wash of Lexington, SC; nieces and nephews. His son, John Jr. and his wife preceded him in death. The family will receive friends on Friday, May 22, 2015 from 3 to 4 pm at Harbor View Presbyterian Church, 900 Harbor View Rd, Charleston, SC 29412, where a Memorial Service will be held at 4:00 pm. Immediately following the service will be Masonic Rites and Military Honors. In lieu of flowers Memorial donations may be made in his honor to Masonic Services Association, Grand Lodge AFM of SC, 1445 Pisgah Church Rd, Lexington, SC 29072 or Shriners Hospital for Children, 950 W Faris Rd, Greenville, SC 29605. Expressions of sympathy may be viewed or submitted online at www.McAlister-Smith.com. Arrangements have been entrusted to McALISTER-SMITH FUNERAL HOME, JAMES ISLAND CHAPEL, 347 FOLLY ROAD, CHARLESTON, SC (843) 614-8494.
To order memorial trees or send flowers to the family in memory of John Wayne 'Tony' Lavender, please visit our flower store.