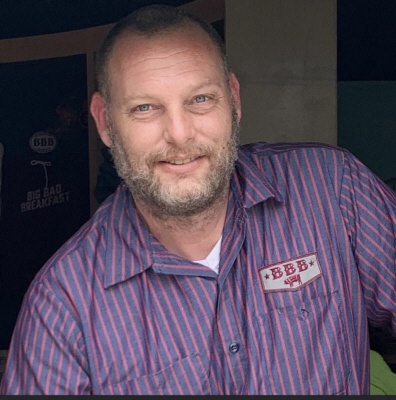 Joe graduated from Irmo High School, in 1991, immediately entering the restaurant industry as a dishwasher working his way up to ownership. He continued his restaurant and hospitality career with various restaurants for 32 years. Most notably with Jim and Nick's Bar-B-Q starting in 2005 in Charleston. In 2018 he partnered with longtime friend Nick Pihakis to open Big Bad Breakfast Charleston. He was loved, respected and will be missed by many in the restaurant community. There are too many to name, but he loved and respected all his restaurant friends along the way who became family to him and him to you.

Joe enjoyed his trucks and his Harley motorcycle named "Eleanor." Most importantly he enjoyed spending time with his family making sure everyone was together.

He was very proud of his three sons and their accomplishments: Mac Cunningham as a SC State Trooper, Dylan Cunningham as a Deputy Sheriff at Cherokee County Sheriff's Office in Canton, GA and Corbin Cunningham sixth grade at Camp Road Middle School.

His dad always used Joe as the BEST example of a true entrepreneurial spirit, a risk taker and someone with the best work ethic anyone would ever see. His example will live on as an inspiration to others.