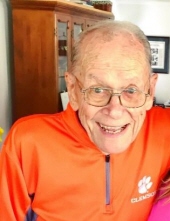 Jay graduated from Clemson University and he would usually be seen wearing his Clemson shirt, hat, and ring even up until his death. He retired from the South Carolina Highway Department. Known as “Pappy” to his family, he was an avid hunter and outdoorsman and he loved to spend time in the woods with his family and friends. He was known for his wit and could be counted on for a joke or teasing comments.

He was a proud veteran of the U.S. Navy, having served in the Pacific Theater in World War II. He was also a devout Christian and taught bible study classes to residents of retirement homes after his own retirement.

Predeceasing Jay was his wife of 49 years, Anne T. Ginn, his parents, his daughter, Catherine Ginn Berg and his sister, Juanita Ginn Schutt.

The family will receive family and friends on December 7, 2020 from 10:30am until 11:30am at Church of the Nativity, 1061 Folly Road, Charleston, SC 29412, with a Mass of Christian burial to be celebrated in the church at 11:30am with burial to follow at Holy Cross Cemetery on James Island.

In lieu of flowers, memorial contributions may be sent to Church of the Nativity Building Fund, 1061 Folly Road, Charleston, SC 29412.

Expressions of sympathy may be viewed or submitted online at www.mcalister-smith.com.
Funeral arrangements have been entrusted to McAlister-Smith Funeral & Cremation, 347 Folly Road, Charleston, SC 29412.
To order memorial trees or send flowers to the family in memory of Joseph Wheeler Ginn, Jr., please visit our flower store.