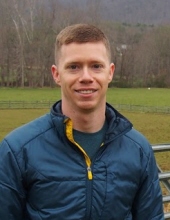 Josh was born on April 19, 1989 in Charleston, SC. He graduated from West Ashley High School in 2007 and joined the Air Force in 2008. While in the Air Force, he served with the 35th Communications Squadron in Misawa, Japan and the 355thCommunications Squadron in Tucson, AZ. After being honorably discharged from the Air Force, Joshua joined the Tennessee Air National Guard, where he served with the 241st Engineering Installation Squadron.

Josh had a passion for the outdoors. He was an active member and meetup organizer for a local Maryland hiking group. He was a devoted father, brother, son, and friend. He was known for his quick wit, beautiful smile, and his dedication to his family.

Visitation will be from 3:00pm until 4:00pm Friday, November 30th directly followed by a funeral service at 4pm. Both the visitation and the service will be at McAlister-Smith Funeral Home, 869 Saint James Avenue, Goose Creek, SC 29445.

Memorial contributions may be made to Hike for Mental Health.
To order memorial trees or send flowers to the family in memory of Joshua Todd Perry, please visit our flower store.