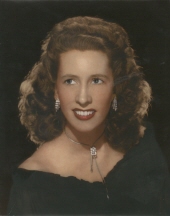 Judith Lucia McLane, 90, of Charleston, SC, passed away on Wednesday, January 7, 2015. She was born on Wednesday, February 20, 1924, in Hemingway, SC, a daughter of the late Mary Annie Hutson and the late Henry Edward Eaddy. Judith grew up in a large family; she was one of eight siblings. She was happily married to William H. McLane for 49 years. Judith graduated from Winthrop College. She taught for 32 years in Charleston County schools, where she was very close with her fellow teachers. She was a member of Grace Methodist Church and the Sullivan's Island Chapter of DAR. She will be remembered as a loving mother and wife, as well as someone who selflessly gave to others. Along with her parents, Judith was preceded in death by her husband, William Howard McLane; and her seven siblings. She is survived by her son, William 'Bill' McLane of Goose Creek, SC and two grandchildren: Jacob Matthew McLane and Madison Kelli McLane of Summerville, SC. The family will receive friends on Saturday, January 10, 2015 from 5:00pm to 7:00pm at McAlister-Smith Funeral Home West Ashley Chapel, 2501 Bees Ferry Road, Charleston, SC 29414. A funeral service will be held at McAlister-Smith Funeral Home West Ashley Chapel on Sunday, January 11, 2015, at 3:00pm. Burial will follow in the Live Oak Memorial Gardens Cemetery. Memorial contributions may be made to The Alzheimer's Association South Carolina Chapter, 4124 Clemson Boulevard - Suite L, Anderson, SC 29621. Expressions of sympathy may be viewed or submitted online at www.mcalister-smith.com. Arrangements have been entrusted to McALISTER-SMITH FUNERAL HOME WEST ASHLEY CHAPEL, 2501 Bees Ferry Road, Charleston, SC 29414, 843-722-8371.