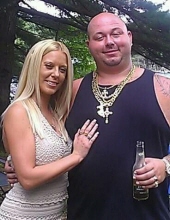 Justin David Barton, Sr., 39, entered into eternal rest on March 7, 2020 in the comfort of his home. A celebration of Justin's life will be held at a later date.

Justin was born on July 12, 1980 in Dover, NH to David Barton and the late Pamela Mascis Barton. Justin was predeceased by his sister, Casie Marie Barton and brother, Brian Barton.

To know Justin was to love him. He was a rare combination of someone who had a love for life and a firm understanding of what was important—the simplicity of living a life with those you love. Justin was a proud man. He always had pictures on hand of the fishes he caught, golf score cards (he won!), and many other proud accomplishments like the numerous New England Patriot’s National Championships. But above them all, he was most proud of his family. He and Kellie were high school sweethearts who proved that true love can endure just about anything. They were the essence of Bonnie and Clyde.

When life couldn’t get any better for them, they found out that they were going to be parents. There was no greater pride to Justin than that of becoming a father. When he met his son for the first time, it was an instant connection, one that cannot be broken even in death.

Justin never met a stranger and welcomed everyone with open arms. He will forever be remembered as a devoted husband, amazing father, loving son, best of the best of friends, a teddy bear uncle, a family guy and always the life of the party.

Arrangements have been entrusted to McAlister-Smith Funeral & Cremation in Goose Creek, South Carolina.
To order memorial trees or send flowers to the family in memory of Justin David Barton, Sr., please visit our flower store.