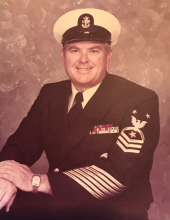 Born on March 13, 1935, in Ninety-Six, SC, Kenneth was a son of the late Edwin David Cook and Minnie Odessa Cook.

He was predeceased by his parents; his brother, Gerald Darwin Cook and infant son, Kenneth Ray Cook, Jr.

Master Chief Petty Officer Kenneth R Cook enlisted in the United States Navy in April of 1952. He served with honor at the following duty stations: The USS Juneau, USS Wisconsin, The Charleston Grulantresslt, The Naval Reserve Training Center, USS Bold, Mine Squadron 10, USS Capricornus, US Naval Air Station Sigonella, Sicily, USS Donner, MCPO Com Mine Warfare Forces and Mine Warfare Inspection Group. He was a decorated combat veteran and had the privilege of returning to Korea as a distinguished guest of the Korean government to commemorate the 60th Anniversary of the Korean War as part of the Revisit Korea Program.

Upon retirement from the Navy in 1976, he immediately began a second career at The Citadel where he was Assistant to the President, Captain of the Motor Yacht Mariah and Director of the Yacht Club.

Ken was a Master Mason for 62 years. He was raised to the degree of Master Mason in 1957 in Sinclair Lodge No. 154, Worshipful Master of Solomon’s Lodge No. 1 in 1985, past District Deputy Grand Master for the First Masonic District and 33rd Degree of the Ancient and Accepted Scottish Rite, Valley of Charleston.

After serving at the Citadel for 20 years, He and Dorothy traveled extensively visiting all 50 states with many friends in the Airstream Travel Club.

Above all of his accomplishments, his most favorite was being Granddaddy.

Lutheran Church of the Redeemer

Lutheran Church of the Redeemer