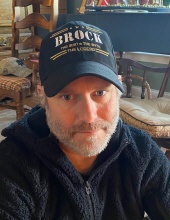 Born on May 12, 1970 in Norfolk, VA, Kevin was the adopted son of Mary Elizabeth Brock and the late Charles Francis (Skip) Brock.

As the son of an active duty Navy family, Kevin lived in Norfolk, VA, several locations in Japan, the San Francisco Bay Area, and finally Charleston, SC where he was living when his father died in 1976.

He and his mother met Bill Becknell in 1984 who became Kevin's close friend and "Dad" until his death in 2010.

Following graduation from Gupton-Jones he worked in funeral service in Greenville, SC and the Charleston area.

He then went on to work for 15 years as a stevedore at the Port of Charleston.

Kevin is survived by his Mother Mary Beth Brock of Mt. Pleasant SC, uncles and aunts Mark Kehoe of Orlando FL, Marty and Natalie Kehoe of Indian Rocks Beach FL, and Matt and Becky Kehoe of Alpharetta GA, April Anderson of Slocan Park British Columbia, and Maggie Clermont of Armstrong BC as well as 7 first cousins and their families, his girlfriend Paige Zofcak and his beloved dog Sully.

Burial will be private.

In lieu of flowers, memorial contributions in Kevin`s memory may be sent to Charleston Animal Society at 2455 Remount Rd, North Charleston, SC 29406.