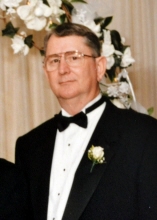 Leland H. Grim, Sr., USN (Ret.), 74, of Ladson, died April 10, 2015. Born in Waterloo, IA, he was the son of the late Marion C. Grim and Bernice A. Grim and husband to Marian Allen Grim. Leland served his country for twenty eight years in the United States Navy, retiring as a Chief Petty Officer. During his time in the Navy, he served in Vietnam. After his military service, he worked as a Healthcare Administrator at the Charleston Naval Hospital and was currently employed with Enterprise. He loved to fish, paint and woodworking. Leland was a family man, who enjoyed the time with his family, especially his grandchildren. He is survived by his wife of forty two years, Marian A. Grim; children, Debra Weber and husband Ron of Schuylkill Haven, PA, Douglas Smith and wife Linda of Sierra Vista, AZ, David Smith and wife Patricia of Eldersburg, MD, Sandra Godfrey and husband Dennis of Goose Creek, Timothy Grim of Gettysburg, PA, Leland Grim, Jr. of Ladson, Jimmy Bockus of Sarasota, FL, Marilyn Beasley of Sarasota, FL, Ellie Sellmer of Sarasota, FL and Joseph Bockus ; brothers, Jim Grim of Frankfurt, Germany, Gregory Grim of Waterloo, IA and Dennis Grim of Liberty, IA. Leland is also survived by seven grandchildren and many great grandchildren, nieces and nephews. He was predeceased by his parents and a sister, Shilah Myers. Funeral service will be held Wednesday, April 15, 2015 at 10:00 a.m. in MCALISTER-SMITH FUNERAL HOME, GOOSE CREEK CHAPEL. Burial will be in Fort Jackson National Cemetery at 1:00 p.m. The family will receive friends Tuesday, April 14, 2015 from 6:00 until 8:00 p.m. in the funeral home. In lieu of flowers, donations can be made to the American Heart Association, 174 East Bay Street, #300, Charleston, SC 29401.
To order memorial trees or send flowers to the family in memory of Leland Howard Grim Sr., please visit our flower store.