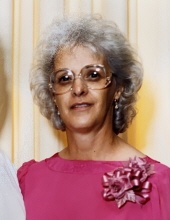 Born on February 4, 1942 in Ironwood, Michigan, Loretta was a daughter of the late George J. Semenak and Loretta Marie Bauman Semenak. Loretta relocated to South Carolina after meeting her husband Jack, to start a family.

Loretta enjoyed taking care of her family, her granddaughters softball games, and traveling to the mountains. Her interests were reading, fishing, cooking, ceramics, and working with stain glass. Loretta had a love for hummingbirds.

A memorial will take place October 24th from 1:00 pm to 3:00 pm at McAlister-Smith Funeral Home in Goose Creek, SC. The family will take family and friends back at their family home to follow. Burial will follow in the coming days at Midway Cemetery in Hemingway, SC.  In lieu of flowers, please donate to the American heart association at www.heart.org or St. Jude’s Children Hospital.
To order memorial trees or send flowers to the family in memory of Loretta Marie Williamson, please visit our flower store.