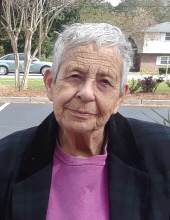 She was born on November 11, 1935 in Chicago, Illinois, daughter of the late Bertha Stuplis and Peter D'Allesandro.

Marilyn was preceded in death by her husband of over fifty years, William Grafton.

She is survived by her children: Therese Petri of Charleston, South Carolina and William Grafton, Jr. of Honolulu, Hawaii; Granddaughters: Shelby and Megan Petri; Grandson, Derek Petri; Several Grandchildren and Great Grandchildren in Hawaii; Sister: Elaine DeFrancisco and Nephews: Peter and Michael of Roselle, Illinois, as well as numerous cousins.

Marilyn worked at the USO before she married William. Once she and William were married and moved to Charleston they continued working with the USO. Marilyn and William adopted their two children and raised them in Charleston, SC. Marilyn loved to travel to Hawaii to visit her family. Her dog, Misty, was extremely special to her.

In lieu of flowers memorial contributions may be made to the family in the name of Shelby Petri: 1339 Bresee Street, Charleston, SC 29412.