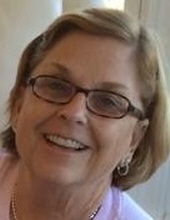 Maureen Sullivan Bolchoz, 65, of Mount Pleasant, SC, wife to COL John Manning Bolchoz, US Army (Ret), entered into eternal rest on March 16, 2020. She left us peacefully and was surrounded by
her loving family.

Maureen was born on February 8, 1955 in Charleston, SC. The daughter of John Donald Sullivan, Sr. and Rosemary Ward Sullivan. She graduated from Bishop England High School in 1973 and attended Clemson University for one year.

Maureen was married to Manning for over 41 years, much of this time as a dedicated and loyal military spouse. Maureen was recently described as the perfect Army wife. She spent many years mentoring and assisting military spouses and their families . She was recognized multiple times over the course of her life for her volunteer work at various church and service organizations in her travels around the world. Most notably, Maureen was recognized by the US Army’s Military Intelligence Corps Association for her outstanding service to soldiers and their families. Maureen made a significant, positive, and lasting impact on many people whose lives she touched and was universally loved.

Maureen worked at various jobs throughout her life, but she most valued being a dedicated wife (Boojee), a loving mother (Mom), a doting grandmother (GiGi), and a loyal friend. Maureen loved spending time with her children and grandchildren, and since they all lived away in recent years, when she couldn’t be with them, she greatly anticipated and enjoyed their regular Facetime calls.
Beginning in her high school days, Maureen was always known as the person who could put together a party on a moment’s notice. This ability to bring together family and friends would be her calling
card for the rest of her life. She always made an effort to make every one she touched feel special and loved.

A Rosary will be prayed at 5 PM.

Due to the ongoing world events, a private Mass of Christian Burial will be held at Christ Our King Catholic Church on Friday, March 20, 2020.

A celebration of Maureen’s life, one to include her countless beloved friends and family, will be held at a later date.

Maureen’s journey now ended, her purpose here served, be thou at peace Boojee/Mom/GiGi.
To order memorial trees or send flowers to the family in memory of Maureen Sullivan Bolchoz, please visit our flower store.