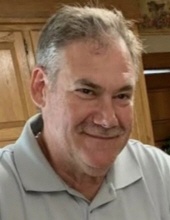 Michael Arthur Wilson, 55, of Hanahan, husband to Teresa Ann Wilson (Knowlson) of 27 years, entered into eternal rest on Tuesday, September 29, 2020, surrounded by his family and friends.

Born on May 28, 1965 in Parkersburg, West Virginia, Michael was a son of the late, Asa Wilson and Barbara (Blankenship) Wilson of Waverly, West Virginia.

Michael worked at Anixter in Electrical Sales.  He was a hard worker and was respected and well-liked by his coworkers and customers.  He was a member of Immaculate Conception Catholic Church where he attended regularly with his family.  He enjoyed watching all kinds of sports. He was an Atlanta Braves fan but his favorite was cheering on the Pittsburgh Steelers.   He loved spending time with his family and always made time for his friends and for helping others.

Michael is preceded in death by his father, Asa and his sister, Pam. In addition to his wife, Michael is survived by his son, Noah Wilson of Hanahan, South Carolina, his brothers Steve Wilson and Asa Wilson (Kim), and sisters, Christa Butterfield and Vickie Kerrigan, and numerous nieces and nephews from West Virginia.

A Mass of the Resurrection will be held at 11:00 A.M. on Wednesday, October 7, 2020 at the Immaculate Conception Catholic Church, 510 St. James Avenue, Goose Creek, South Carolina 29445 with Father Noly Berjuega, CRM, presiding as the Celebrant.  Rite of Committal and Interment will follow the mass at Carolina Memorial Gardens in North Charleston.  A gathering of Michael's family and friends for a time to share memories with his family will be from 5:00 P.M. until 7:00 P.M. on Tuesday, October 6, 2020 at McAlister-Smith Funeral & Cremation in Goose Creek.

In lieu of flowers, memorial contributions in Michael`s memory may be sent to American Cancer Society, www.cancer.org. and/or St. Jude's Children's Hospital.