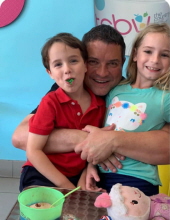 He was an avid scuba diver and fisherman. Friends describe him as a great person and very loyal to his children, friends and fishing. It would be hard to find a picture of Nik not smiling. In addition to being a wonderful father Nik was incredibly well regarded in his field of cyber security and IT.

In lieu of flowers, memorial contributions in Nicholas`s memory may be made to Surfrider Foundation and or Loving and Learning Educational Child Care

Funeral arrangements have been entrusted to McAlister-Smith Funeral Home, 347 Folly Rd., Charleston, SC 29412, (843) 614-8494.
To order memorial trees or send flowers to the family in memory of Nicholas Gibson, please visit our flower store.