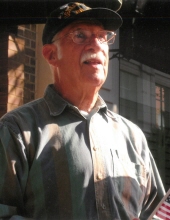 Born on October 31, 1924 in Moca, Dominican Republic, Rafael was a son of the late Rafael De La Maza and Aura De La Maza.

As a non-citizen, he served our country in WWII as a volunteer, entering the U.S.Navy at the age of 17, without his mother’s permission. He served throughout WWIl aboard the USS New Jersey and was decorated for his service. Two years into his service he became a US Citizen.

After the war, while still serving in the Navy, he married the love of his life, Alma Santana. Together they raised 3 children and remained happily together until her death 54 years later.

In 1961, Rafael, along with members of the De La Maza family, were instrumental in freeing the Dominican Republic from the oppressive Trujillo regime.

Rafael was a lifelong HAM radio enthusiast and a member of the Charleston Amateur Radio Society. He was also a member of Christ Our King Catholic Church. He has participated in many veteran events throughout the year and was recently honored by the USS New Jersey’ s museum in Camden Yards Oral History Program.