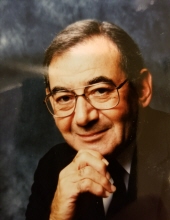 It is with great sadness that the family of Dr. Richard “Dick” Lawrence Dobson (of Mt. Pleasant, SC) announces his passing on Saturday, February 16, 2019 at the age of 90.

He was born on April 12, 1928 in Boston, Massachusetts, son of the late Celia Segal Dobson and the late Joseph Dobson. He attended Boys Latin and later served in the Navy where he received an honorable discharge. He went on to obtain his medical degree from the University of Chicago and began an illustrious career as an academician renowned for his ground-breaking research in dermatology.

He was affectionately known as “Popsy” to his granddaughters who cherished him. He was a warm and wonderful father and husband, with a special knack for entertaining his family with his clever wit, wisdom, and Popsyisms.

The family will receive friends on Wednesday, February 20, 2019 from 5:00PM to 8:00PM at McAlister-Smith Funeral Home, Mt Pleasant.

Memorial contributions may be made in honor of Dr. Richard L. Dobson to the Myasthenia Gravis Foundation (www.myasthenia.org). (When contributing online, there is an option to have the family advised of the contribution. If you wish to, you may enter the email address of Dr. Dobson’s son Rick (rdobsonjr@gmail.com.)

Rodenberg Chapel at Franke at Seaside