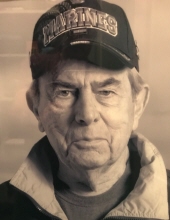 He was born on March 13, 1926 in Saugerties, New York, son of Madeline Schoonmaker and Cortland Whitaker.

He is survived by Eileen Whitaker of Mount Pleasant, South Carolina; Scott Whitaker of Atlanta, GA. Sloane Whitaker of Seattle, WA., step daughter LuAnn Drost of Evington, VA., and the grandchildren he dearly loved Wyatt, Holland and Maddie Whitaker all of Atlanta, Ga. (to whom he was affectionally knows as “Pops”).

After graduating from Saugerties High School in June of 1944, Richard joined the Marines. He completed boot camp at Parris Island, SC and infantry training at Camp Lejeune NC. and was assigned to the 29th Regiment of the Sixth Marine Division.

On his 19th birthday in 1945 be boarded an attack transport bound for the Japanese held island of Okinawa. He was assigned to Fox Company in a machine gun platoon and as a company runner. He received the Purple Heart ribbon and medal for wounds received in action during the Battle for Sugar Loaf Hill on May 17th, 1945. Whitaker also received a combat action ribbon, and his division received the Presidential Unit Citation for extraordinary heroism in action against enemy Japanese forces during the assault and capture of Okinawa.

After the war Richard returned home and graduated from Syracuse University in 1952 with a BA in Journalism & Public Relations. He worked for the Shell Oil Company and Utica College before becoming Director of Development for Kent School (Kent. Ct.) in 1962, where he remained until his retirement in 1989. Dick was an honorary member of the Kent class of 1944, and was instrumental in helping raise funds for many of the sports facilities that stand today, including the famed Nadel hockey rink.

During his years in Kent he was a member of the volunteer fire department for 21 years and was a founder of the Kent Squirt hockey program and served as head coach for 15 years. Many Kent boys learned to skate and play hockey under coach Whitaker.

After retiring Richard moved to Oriental, NC where he and Eileen enjoyed the sailing life aboard their beloved Evergreen for nearly 10 years. They then moved to Mount Pleasant where they enjoyed the low country life, and where Dick became a volunteer at the USS Yorktown at Patriot’s Point for the past 10 years. He will be remembered for his kindness, sharp wit and his willingness to lend a hand to anyone who needed it.

A celebration of life service will be held at 3:00 PM on Thursday, June 13, 2019, aboard the USS Yorktown, where Dick volunteered, in the Smokey Stover Theater at Patriots Point, 40 Patriots Point Road, Mt. Pleasant, SC 29464.

Expressions of sympathy may be viewed or submitted online at www.mcalister-smith.com.
Arrangements have been entrusted to McAlister-Smith Funeral Home, West Ashley, 2501 Bees Ferry Road, Charleston, SC 29414, (843) 722-8371.
To order memorial trees or send flowers to the family in memory of Richard Whitaker, please visit our flower store.