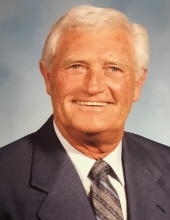 After attending Louisburg Junior College in NC, he served in the Presidential Squadron in the US Air Force for four years. After serving his country, he moved to Atlanta and attended Georgia Tech. The early part of his life he managed automobile dealerships in the Carolinas and Florida. After moving to Folly Beach he owned and operated the Linville Car Center. With his wife Carol, the Linvilles started Pet Helpers forty years ago. With the support of the community and volunteers, they have saved countless animals and spayed and neutered many to keep the population of unwanted animals down. Three weeks before Hurricane Hugo in 1989, Bob was elected mayor of Folly Beach. He was widely praised for his response to the devastation which Hugo left behind.

His service to community was vast. He served on the Planning & Zoning committee & City Council, as Mayor he oversaw the Folly beach re-nourishment project, led a truck convoy to Homestead after Hurricane Andrew, made the city fiscally responsible, and started the annual Folly Beach Christmas Parade. Those are just a few of his accomplishments. He was recently honored by the City of Folly Beach with the Hall of Fame Award on October 9, 2018. “To the World, you may be only one person, but to Folly Beach, you are the world.”

He was predeceased by two sisters: Nancy Jones and Jean Clary. He was also a beloved brother-in-law to the Dooleys.