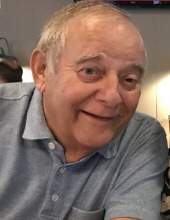 Robert M. Kelly, 75, of Johns Island, SC, and husband of Charlotte Maxine Kelly passed away on Friday, June 14, 2019, surrounded by his family

Born on January 22, 1944, in Cole City, West Virginia, he was a son of the late Gayle and Sarah Rasco Kelly.

His “bride” was the love of his life and he made it very well known. Nico, his precious dog was his buddy. He was a jokester, love making beer, boating, fishing, crabbing, lover of bluegrass music, restoring antique cars, tool and die maker, loved to talk to friends, and a mile-long storyteller.

He will be dearly missed by his family and friends.

The family will receive friends one hour prior to the service, from 1:00 PM to 2:00 PM.