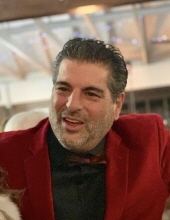 Robert Peter Vincelli, 57, of Hollywood, South Carolina, husband to Jennifer Vincelli entered into eternal rest on March 28, 2020 surrounded by his family. Born on May 31, 1962 in Eatontown, New Jersey, Robert is the son of the late Dominic Anthony Vincelli and Mary Francese Vincelli.   Robert in his younger years was an accomplished trumpet player in the United States Army, and with his younger brother played and toured with Buddy Holly. He was an actor in Hollywood and had the opportunity to be on several episodes of General Hospital. He was in several smaller movies alongside of Eric Estrada and many more. He was an actor with the Flowertown Players in Summerville, South Carolina from time to time.

Robert was an entrepreneur and owned TV Host in Charleston, South Carolina and owned a solar company. He was in the heating and air business as a salesman for many years along with his solar. What Robert loved most was his family and Italian traditions. Robert had a way about him that you just wanted to be around him and he made everyone feel so important. His faith in God was a big part of his life.
Robert loved to golf with his son, Anthony and his friends, painting, and taking new projects around his property. Robert exemplified the definition of love, which was seen by everyone he met.   Robert is survived by his loving wife, Jennifer Vincelli, his two children, Sara Vincelli Dozier and Anthony Vincelli, step-children, Brittney Husk and Brian Warchol, son-in-law, Daniel Dozier, and daughter-in-law, Taylor Warchol, and grandchildren Jaiden, Braiden, Grey, Scarlet, Aileen, and Clara.   The service will be held at Glendale Memorial Cemetery in Walterboro, South Carolina on April 10, 2020 at 2pm.

DUE TO THE MATTERS OF COVID 19 AND MOST OF THE LOCAL FLORISTS BEING CLOSED, PLEASE FEEL FREE TO ORDER FROM 1800 FLOWERS.
To order memorial trees or send flowers to the family in memory of Robert Peter Vincelli, please visit our flower store.