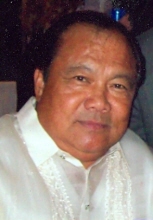 Rodolfo â€œRudyâ€ Arbis, 74, of Goose Creek, passed away September 4, 2015. Born in the Philippines, he was the son of the late Godofredo and Memoracion Plata Arbis and husband to Lita Arbis. Rudy served his country in the United States Navy for over twenty years, retiring as an MS1 and also was proud to serve Berkeley County for twenty years retiring as a Lieutenant with the Sheriffâ€™s Office. During his time with Berkeley County Sheriffâ€™s Office, he worked as the Crime Prevention Officer for many years and spoke often to schools, organizations and neighborhood watch groups. Rudy loved sports and enjoyed playing basketball and table tennis. He was a member of the Berkeley County FOP, Lodge # 19, Franklin Lodge #96, Immaculate Conception Catholic Church, Filipino Travelerâ€™s and he was a Shriner. He is survived by his wife, Lita Arbis; children, Roldan Arbis of Goose Creek and Nicole DeLaney and husband David of Mount Pleasant; grandchildren, Riley and Colin DeLaney; sisters, Precy Mayuyo and Soly Martinez of the Philippines. Rudy is also survived by many extended family member and friends. Mass of Christian Burial will be held Thursday, September 10, 2015 at 10:00 a.m. in Immaculate Conception Catholic Church. Burial will follow with military honors in Plantation Memorial Gardens. The family will receive friends on Wednesday, September 9, 2015 from 5:00 until 8:00 p.m. in MCALISTER-SMITH FUNERAL HOME, GOOSE CREEK CHAPEL. Expressions of sympathy can be submitted or viewed online at www.mcalister-smith.com.
To order memorial trees or send flowers to the family in memory of Rodolfo Plata 'Rudy' Arbis, please visit our flower store.