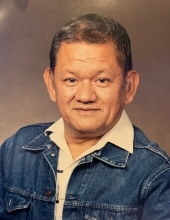 Romy was born on April 7, 1939, in Lucban Quezon, Philippines to Ruperto Salvatus Cuvin and Andrea Racelis Cuvin. Romy joined the Navy in 1963, where he began as a Steward Third Class and worked his way up to Military Sealift Command. After retiring in 1983, Romy earned high praises and awards as a manager at the North Charleston Commissary.

While his career at the Navy and Commissary were both significant milestones, Romy valued higher education and pursued it. He graduated from Webster University, now Charleston Southern University, in the late 1980s with a degree in data processing.

Romy was a member of the Omar Shriners. He enjoyed praying the Rosary, as well as gambling at the Casino when he visited his children. He was known for his contagious laughter and colorful stories. Romy never knew a stranger and always welcomed new friends with open arms.

The service will be held at Immaculate Conception Church in Goose Creek, SC, at 10:00 AM on Friday, January 17, 2020. The burial will be held at Carolina Memorial Gardens immediately following the service.