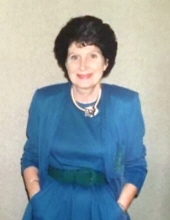 Born on May 3, 1931 in London England, Sheila was the daughter of the late William Stead McBride and the late Susannah McBride.

Sheila had a wonderful sense of humor and an open heart. Causes near and dear to her were helping animals and children. As an Air Force wife, she accompanied her husband on many moves and travels overseas and in the United States. She was British by birth, but became a proud US Citizen in 1958

Sheila is survived by her loving husband of 66 years, MSgt. Lon M. Billings, USAF (ret.) and their beloved cat, Austin; her daughter, Susan Billings; granddaughter, Brenna Lamprey; grandson, Jared Billings (Chelsea) and great-granddaughter, Olivia Billings. Additionally, she leaves her dear cousins in Australia, and loving in-laws and their families, as well as friends and neighbors who knew her to be kind and caring.

Memorial contributions may be made to Pet Helpers, 1447 Folly Road, Charleston, SC 29412.

Expressions of sympathy may be viewed or submitted online at www.mcalister-smith.com. Funeral arrangements have been entrusted to McAlister-Smith Funeral Home, James Island, 347 Folly Rd., Charleston, SC 29412, (843) 614-8494.
To order memorial trees or send flowers to the family in memory of Sheila M Billings, please visit our flower store.