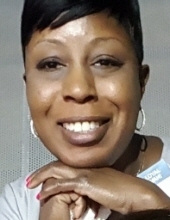 Stacey Alexandria McCorkle was born in Chicago, Illinois on March 15th, 1972 to the union of Frank T. and Mary Lou McCorkle. She was the second of three children. Stacey lived in Chicago until March 2005, when she moved to Summerville, South Carolina with her parents and sister.

Stacey graduated from Chicago Vocational High School in 1989 and then attended Chicago State University. Since 1996, Stacey worked at the United States Postal Service as a Mail Handler in both Illinois and South Carolina. Throughout her life, she enjoyed being with friends and family, traveling, and trying new things.

In 1988, at the age of 17, Stacey dedicated her life to Jehovah and was baptized as one of Jehovah’s Witnesses in Chicago, IL. She loved to research and meditate on bible subjects and was eager to implement lessons learned into her life. Stacey enjoyed spreading the good news of Jehovah’s Kingdom. In 2018, Stacey had the privilege of travelling to Norway to attend an International Convention of Jehovah’s Witnesses. She faithfully attended her Christian meetings and continued to develop special friendships within the congregation.

Stacey fell asleep in death on February 20, 2020. She was preceded in death by her parents, Frank and Mary McCorkle and her oldest brother, Frank McCorkle Jr.
She is survived by her sister, Frances M. McCorkle; nephew, Brennan McCorkle; uncles and aunts: Theodore Barnett (Chris); Charles Barnett (Roslyn); Willis Barnett; Hattie Smalls (Johnnie); Julie Gibson; Rozena Egbarin (Leslie); Edith Lenoir (Anthony Sr.); Nathan McCorkle (Dorothy); James McCorkle (Doris); and a host of cousins. Stacey will be greatly missed by all of her friends and family. We look forward to seeing Stacey again in good health on a paradise earth under God’s Kingdom rule.

Expressions of sympathy may be viewed or submitted online at www.mcalister-smith.com. Funeral arrangements have been entrusted to McAlister-Smith Funeral & Cremation, 869 St. James Ave., Goose Creek, SC 29445, (843) 553-1511.
To order memorial trees or send flowers to the family in memory of Stacey A McCorkle, please visit our flower store.