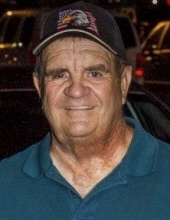 Starling William Carroll, known by his friends as Bill or Boots, passed away on June 29, 2019 at the age of 78.

He was born on October 31, 1940 in Charleston, SC, son of the late Estelle Murray and William Journ Carroll.

Bill was preceded in death by his grandson, Shane Newman.

While Bill retired as a builder in the 1990s, he also spent time as a sheriff deputy in Aiken County, maintained 21 bingo halls across the state, played semi-professional football for the Charleston Generals, and coached youth sports teams at the James Island YMCA for many years. He enjoyed spending time with his family, playing poker with his close friends, and feeding the neighbor’s cows.

In lieu of flowers memorial contributions may be made to the Patient Access Network Foundation for cancer at www.panfoundation.org.
To order memorial trees or send flowers to the family in memory of Starling William Carroll, please visit our flower store.