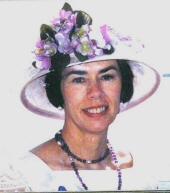 Suzanne Lindberg Flynn, a resident of Mt. Pleasant, South Carolina passed away at home on April 7, 2015 after a long battle with cancer, with her family at her side. Suzanne was born on December 25, 1953 in New York City, the daughter of Marie D. and Charles E. Lindberg. She attended the Marymount School of New York, graduated from Wheaton College in 1975, and later received her M.S.W. from Columbia University in 1996. Suzanne married George D. Flynn on October 18, 1975 in Bronxville, NY. and had two sons, Michael and Scott Suzanne worked for Readers Digest in New York and then left to raise her family, actively volunteering at her sons' schools during their formative years. Suzanne loved art, fashion, design, the beach, flowers and gardening and was always a gracious hostess. In recent years she designed jewelry for her company 'Divine Brilliants'. Suzanne was a member of First (Scots) Presbyterian Church. She was also a member of the Dragon Boats of Charleston, the Hat Ladies of Charleston, P.E.O., the Garden Club of Charleston, the Daniel Island Club and the Edgartown Yacht Club. Suzanne is survived by her son Michael D. Flynn and her daughter-in-law Jennifer Brooke Flynn of Chevy Chase Maryland; her son Scott D. Flynn, and her daughter-in-law Maureen Carroll Flynn of Richmond Virginia; and, her brother Robert J. Lindberg of Boston, Massachusetts. There will be a Memorial Service at First (Scots) Presbyterian Church, 53 Meeting Street, Charleston, SC on Monday April 20th at 11:00 a.m. Later in August there will be a graveside service on Martha's Vineyard where Suzanne spent many wonderful summers. Memorial donations may be made to Dragon Boat Charleston, 1643 Savannah Highway, #261, Charleston, SC 29407, or Cottey College, 1000 West Austin, Nevada, MO 64772. Expressions of sympathy may be viewed or submitted online at www.McAlister-Smith.com . Arrangements have been entrusted to McALISTER-SMITH FUNERAL HOME, MT PLEASANT CHAPEL, 1520 RIFLE RANGE ROAD, MT PLEASANT, SC (843) 884-3833.
To order memorial trees or send flowers to the family in memory of Suzanne L. Flynn, please visit our flower store.