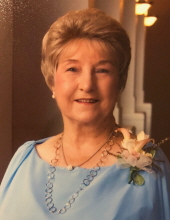 Syble Dobbins McInvaille passed away peacefully on Tuesday, September 3, 2019 after a brief illness.

The relatives and friends of Syble McInvaille are invited to attend the visitation on Monday, September 9 from 10:00 am until 11:30 am at McAlister-Smith Funeral Home West Ashley. A memorial service will follow immediately in the chapel at 11:30 am. Burial will follow at Live Oak Memorial Gardens, Charleston, SC. A luncheon for all relatives and friends will be served after the burial at the McAlister-Smith Funeral Home West Ashley.

Syble was born on March 4, 1931 in Duncan, SC, daughter of the late John Ozelle Dobbins and the late Minnie Lois Howe Dobbins. She was raised with her family in Cross Anchor, SC. After finishing Cross Anchor High School, Syble moved to Clinton, SC to become the bookkeeper at Belk Department Store. She married Charles "Chuck" Thomas McInvaille of Clinton on December 26, 1951 and enjoyed 32 years of marriage until his death in 1984. In 1976 Syble was hired as the Office Manager and Financial Secretary for Ashley River Baptist Church, a position she proudly held for 30 years until her retirement at age 76.

In addition to Syble's bookkeeping skills she was an extraordinary caterer and wedding event planner. Her interests included following the Atlanta Braves since 1938, church activities, gardening and home decorating.