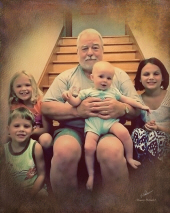 Tarlton Bingham, 67, of Charleston, SC entered into eternal rest on Nov. 24, 2016. He was born July 27, 1949 in Charleston, SC to the late Robert and Helen Bingham. Tarlton is survived by his wife of 48 years, Pamela Walizer Bingham; children Chantel Bingham Morris (Chris) and Kevin Bingham, both of Charleston; sister Sandra Coleman (John); brother Tommy Bingham (Pam); and one grandchild, Alyssa Renly Morris. He also had seven nieces and nephews and three great nieces and nephews. Tarlton graduated from James Island High School in 1967 and attended Baptist College before going into the Marine Corps. He served in Okinawa and Vietnam. After four years as a Marine, he and his family moved back to Charleston, where he started working for Southern Railway, becoming an engineer after two years. He retired after 20 years to then co-own and run Busy B's Wholesale Florist for 22 years. He enjoyed working in the yard, loved music, loved playing with his granddaughter, nieces and nephews - and loved his dogs Millie and Maggie, though no animal would ever replace his dog Kali in his heart. You canâ€™t forget his Carolina Gamecocks. Tarlton was an endless fountain of good humor and jokes, constantly keeping his friends and family laughing - and, just as often, groaning. He was always the life of the party. The family will receive friends Wednesday, Nov. 30, 2016 from 5-7pm at McAlister-Smith Funeral Home, James Island Chapel. A Celebration of his Life will be held at 11am on Thursday, Dec. 1, 2016 at Bethany United Methodist Church, 1853 Maybank Highway, Charleston, SC, 29412. Burial will be private. In lieu of flowers, the family requests that donations be made to Bethany United Methodist Church or the charity of one's choice. I want to thank my children, my very close friends Joanne and Marilyn and my best cousin Mary Muck for all of their support and time during this difficult period - and always. Condolences may be viewed or submitted at www.McAlister-Smith.com. Arrangements entrusted to McALISTER-SMITH FUNERAL HOME, JAMES ISLAND CHAPEL, 347 Folly Road, Charleston, SC 29412, 843-614-8494.
To order memorial trees or send flowers to the family in memory of Tarlton Bingham, please visit our flower store.