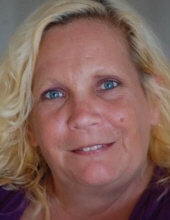 Therese Lynn Petri, 52, of Charleston, SC entered into eternal rest on March 7, 2020, surrounded by her family.

Born on October 23, 1967, in Charleston, SC Therese was a daughter of the late William Wallace Grafton and Marilyn Grafton.

Therese was born and raised on James Island. Her greatest joy was the time spent with her children and grandchildren. Smoking her cigarettes and drinking her diet coke while watching her grandbabies play in the back yard was her idea of a good time. Her smile would light up a room. Therese didn't have much in her life, but would give all she had to help someone in need. A shoulder to cry on, or a listening ear to vent to, she was always there. Her hobby was to Crochet blankets while watching her favorite TV shows, NCIS and Criminal Minds. She sang her heart out to every Reba McEntire or Dolly Parton song. Therese was loved and will be missed by so many.