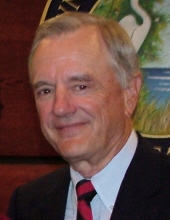 William George Wert, 79, of Kiawah Island, SC, passed away peacefully on Monday, April 29, 2019, with the love of his life and wife of 31 years, Patricia Finn Wert, at his side.

Bill was born on May 10, 1939, in New York, New York. He is preceded in death by his parents, James Van Atta and Opal Mamie (Peck) Wert, his brother, Jimmy Wert, and his sister, Virginia Wert Hughes.

Bill graduated from the State University of New York Maritime College and Union College in Schenectady, NY, with a B.S. and M.S. in Mechanical Engineering. After two years in the Maritime Industry and four years in the U.S. Navy, he joined the General Electric Company. Over the next 33 years, Bill held a variety of domestic and international management positions and was appointed a GE Vice President in 1993. Bill retired from GE in 1999 and he and his wife Pat moved to Kiawah Island. Unable to stay fully “retired”, Bill was elected to the KICA Board of Directors in 2000, serving his last year as Board President and held four consecutive terms as Mayor of the Town of Kiawah Island from 2002-2010.

Bill loved skiing, golf, the NY Giants and the Brooklyn Dodgers, travel and time spent with his family. He served as chairman of the board for the MUSC Storm Eye Institute and a board member of Our Lady of Mercy Community Outreach.

The entire Wert Family wishes to extend their heartfelt thanks to his caregivers, the wonderful staff at Wellmore of Daniel Island and the Hospice of Charleston team.

In lieu of flowers, donations in Bill’s memory may be made to Respite Care Charleston, www.respitecarecharleston.org; Our Lady of Mercy Community Outreach, www.olmoutreach.org; and CurePSP, www.curepsp.org.