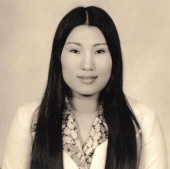 Yong Sun Pak Gadus, 67, of Ladson, SC, stepped into eternity on Saturday, September 24, 2016, surrounded by her family. Born in South Korea, she was a daughter of the late Chol Su Pak and Chom Lee Pak. She moved to the United States in the mid-1970â€™s where she remained for the duration of her life, raising her family, traveling the world, and eventually graduating as an ordained minister of the Korean Presbyterian Church. Yong Sun leaves a rich legacy of Christian love and achieving oneâ€™s dreams. Her fervent prayer life and love of Christ was a secret to none of her family and friends (and not a long-kept secret to strangers, either). She dearly loved her children and grandchildren, who will remember her as a mother and grandmother who loved deeply, worked ardently, and gave generously. She is survived by her daughter, Linda Kay (Todd), and their son, T.J., of James Island, SC; her son, Jerry Gadus, Jr. (Sarah Beth), and their children Sophie Jaq, Helen Diane, and Elle, of Spartanburg, SC; her sister, Yong Sin Sciarretta, of Vineland, NJ, and her niece and nephew, Michelle and Andrew Sciarretta; and her sisters Yune Soon Kim and Yune Ha Kim of South Korea. She was pre-deceased by two brothers, Song Oke Kim and Yong Chol Pak. A celebration of her life will be held at 7:30 p.m. on Thursday, September 29, 2016, at Charleston Truth Alliance Church, 106 Growden Lane, Ladson, SC 29456. Memorial donations may be made in her name to Charleston Truth Alliance Church or a charity of oneâ€™s choice. Online condolences may be submitted or viewed at www.mcalister-smith.com. Arrangements are entrusted to McALISTER-SMITH FUNERAL HOME â€“ JAMES ISLAND CHAPEL, 347 FOLLY ROAD, CHARLESTON, SC 29412, 843-614-8494.
To order memorial trees or send flowers to the family in memory of Yong Sun Gadus, please visit our flower store.