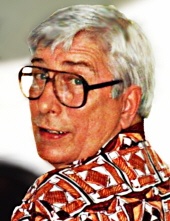 Born in Blenheim, SC August 28, 1935, Aaron served in the US Navy between 1955 and 1961, after which he received a Bachelors of Arts from Baptist College at Charleston, and a Masters Degree from the University of North Carolina. Aaron was a lifelong gardener, avid sailor, and accomplished woodworker, whose career ranged from journalist with the News and Courier, recreational therapist with MUSC, contractor, and restauranteur. Aaron loved a good limerick, and was a gifted vocalist and longtime member the choir of Cathedral of St. John the Baptist.

He was predeceased by his parents Fred A. and Fannie Dailey Clark, and three brothers, F. Evans Clarke, Neville B. Clarke, and Arden S. Clark.

Memorial and remembrance at Brownsville Baptist Church, Brownsville, SC will be announced at a later date.

In lieu of flowers the family asks that donations be directed to the Parkinsons Foundation, https://www.parkinson.org/Carolinas.


To order memorial trees or send flowers to the family in memory of Aaron Gilbert Clark, please visit our flower store.