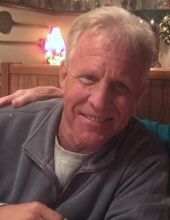 Brian John Koye, 61, of Summerville, SC passed away April 25, 2020. He was born in New Brunswick, New Jersey on July 20, 1958 to Eleanor Daggett Koye and the late Elmer Koye. A memorial service will be held in Brick, New Jersey at a later date.

Brian was a lover of sun, sand, sailing and crabbing. The last garnering him the nick name, “Crab Guy”. Home improvements were also his hobby and avocation, and he lent his skills to friends and family. Brian had a great sense of humor and loved his family dearly. Brian was an avid sports fan following the New York Yankees, New York Jets and New York Rangers all his life. He graduated from Edison High School in 1976 where he played football and lacrosse.  He was also a graduate of Middlesex County College in Edison, New Jersey where he earned his degree in computer programming with honors. Before retiring, Brian was a computer programmer for Pfizer Pharmaceuticals. Brian was also a Cold War veteran in the United States Air Force.

Brian is survived by his mother, Eleanor Daggett Koye; brother, Kenneth Koye and wife Barbara; brother, Gary Koye and wife Caroline; sister, Karen Lamela and her family. Brian is also survived by his niece, Jennifer Slentz and her husband Andrew; great nieces and nephews, Halley, Travis and Grace Slentz; along with one great-great niece, Kayta Millwood. He is also survived by many aunts, uncles and cousins that will also miss him.

In lieu of flowers, donations may be made to St. Jude Children’s Hospital.

Expressions of sympathy may be viewed or submitted online at www.mcalister-smith.com. Arrangements have been entrusted to McAlister Smith Funeral & Cremation, 869 St. James Avenue, Goose Creek, SC 29445, (843) 553-1511.
To order memorial trees or send flowers to the family in memory of Brian John Koye, please visit our flower store.