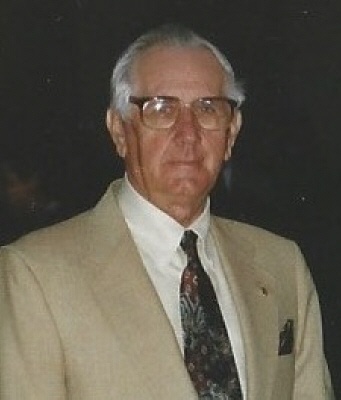 Dr. William Franklin Landing, Sr. (Frank) entered into eternal rest on November 26, 2020 after a brief illness.
Frank was 90 years old, born in Plymouth, NC on May 12, 1930 as the second son of Lee Victor Landing, Sr. and Mildred Ange Landing.
A learned man, Frank obtained bachelor's and master's degrees from East Carolina University and later a PhD in Education from Duke University. He spent his career in the school system as a teacher, principal, financial administrator and ultimately Assistant Superintendent of Durham County Schools. After retiring, he was elected to two terms on the Durham County School Board. Frank was an active member for many years in the Durham Lions Club. He was also the author of a historical fiction novel, War Cry of The South, which detailed the exploits of the Confederate Navy ironclad, the Ram Albemarle.
A proud military servicemember, he was a veteran of the U.S. Marine Corps and was a reserve officer in the U.S. Air Force. He was seldom seen without his trusty and faded Marine Corps baseball hat.
Known as "Pop" to his family, he loved current events, Duke basketball, history, coin collecting and meeting and conversing with strangers. A natural conversationalist, he was quick to engage others and was always entertaining with funny stories and anecdotes. His wit and easy manner
endeared him to all he met on his daily forays around town for "a bite to eat."
Predeceasing Pop was his wife of 38 years, Anne House Landing, his parents Lee and Mildred and his older brother, Lee Victor Landing, Jr.
Surviving "Pop" is his wife of 17 years, Carolyn Stillman Landing as well as his immediate family consisting of his son William Franklin Landing Jr. and wife Tina of Jamestown, NC and his son Joseph Murphy Landing, Sr. and wife Kathy of Mount Pleasant. Pop was blessed with four grandchildren: Jeff Landing, who is married to Amy living in Midlothian, VA, and Kelli Landing Crawford, married to Steven living in Greensboro, as well as Kristie Landing and Joseph Landing, Jr. of Mt. Pleasant, SC. He also has two great-grandchildren, Colin and Connor Landing, sons of Jeff and Amy.
Friends, neighbors and loved ones are invited to attend a visitation on Monday evening, November 30th from 5:00PM to 7:00PM at McAlister Smith Funeral Home at 1520 Rifle Range Road and/or a service of remembrance at Hibben United Methodist Church, 690 Coleman Blvd on Tuesday morning, December 1st at 10:00AM.
Following the service, Pop will be taken to Windley Cemetery in Plymouth, NC for a graveside service and internment with other members of his family.
Memorials in his name are requested to be made to Roper Hospice Cottage, 676 Wando Park Boulevard, Mount Pleasant, South Carolina 29464.
Expressions of sympathy may be viewed or submitted online at https://www.mcalister-smith.com.
Funeral arrangements have been entrusted to McALISTER-SMITH FUNERAL & CREMATION, Mt. Pleasant, 1520 Rifle Range Rd., Mt. Pleasant, SC 29464, (843) 884-3833.
To order memorial trees or send flowers to the family in memory of Dr. William Franklin " Frank " Landing, Sr., please visit our flower store.