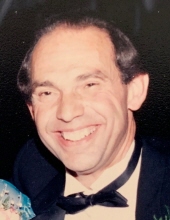 Edward, son of the late James and Grace Galluzzo, was born in Ossining, NY on October 22, 1934. After graduating from Ossining High School, Edward completed a 4-year degree at Manhattan College in 1956 and eventually became the President and owner of J.V. Galluzzo, Inc., the construction company founded by his father, James Vincent Galluzzo.

Edward is pre-deceased by his wife, Janet, who passed on March 25, 2017 (after a long battle with Multiple Sclerosis) from metastatic lung cancer.

After college, Edward (known to most of his family and friends as Ed or Eddie), served in and was honorably discharged from the US Army. Ed met Janet (then Janet Sichel from Briarcliff Manor, NY) in 1959, and they were married on October 29, 1960.

Ed and Janet raised their family and lived in Ossining until they moved to Stamford, CT in 1996. After wintering in Ft. Lauderdale, they lived there full time from 2011, until Janet’s passing in 2017. A year later, Ed moved to Mt. Pleasant, SC, the home of his son James, daughter-in-law Emily, and grandsons, Ned and Jake. Ed is also survived by his daughter Donna and her wife, Lisa Gorney, of Portland, Maine.

Ed was a proud member of the Bricklayers Local 5 NY and Bricklayers International. He and Janet loved dinners out and enjoyed putting their feet in the sand in Puerto Rico, Acapulco and Bermuda. Edward was an avid golfer and always enjoyed a glass of chilled red wine. Both he and Janet were passionate NY Yankees fans, celebrating their 50th wedding anniversary in 2010 by attending a Yankees game with their immediate family.

Because he hadn’t lived in South Carolina for very long, his family has decided not to hold any services at this time. In lieu of donations or other remembrances, Edward’s children would ask his friends and family to remember him through enjoying a round of golf, a dinner out or a glass of wine with loved ones.