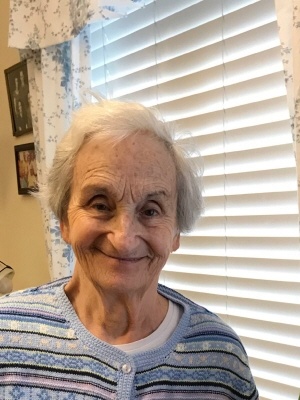 Genevieve was born and raised in Niagara, WI, the daughter of Clifford and Mary Nault. She obtained her Bachelor's degree in Education at Whitewater College and was a member of Alpha Delta Kappa, an international organization for women educators. Squirt and Gen were married on August 25, 1951, in Niagara, Wisconsin. Gen and Squirt both started their teaching careers in Melrose, WI and later moved to Shawano, WI where she taught business classes. Gen and Squirt spent the remainder of their
teaching careers in Shawano and raised their three children, Tom, Mike, and Mary. They retired from teaching in 1989.

Gen was known for her love of life, dedication to her faith, family and friends. She and Squirt spent their summers at their beloved cottage on Trump Lake in Wabeno, Wisconsin. Squirt quickly came and went everywhere with her, and just before they left, he would always say, "Come on, Gen." Their commitment to each other withstood the test of time and separation and are once again back together.

Funeral services will be held in Wabeno, WI.

In lieu of flowers and plants, the family has requested memorials in her name to the Alzheimer's Association or the charity of your choice.