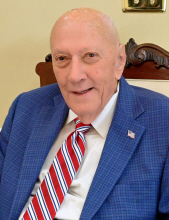 Howard Rivers Jacobs, Jr. (Rivers, Jake) entered into eternal rest on March 4th at the age of 91. The son of Howard Rivers Jacobs and Pauline Risher Jacobs, Rivers was born on December 10, 1928. He was a 1949 graduate of The Citadel, with a BS in business administration, and was commissioned an infantry Second Lieutenant in the US Army.

In February 1950 Rivers was ordered to active duty with the 19th Infantry Regiment, 24th Infantry Division, in the post-World War II occupation of Japan. Only seven days after North Korea invaded South Korea on June 25, 1950, his unit was rushed to the front. Serving as a rifle platoon leader through eleven months of combat in five major Korean campaigns, Rivers was wounded twice. He received two Purple Heart awards and the Combat Infantry Badge, as well as other awards and decorations.

In June 1951 Rivers was assigned to the 8th Division Tactics Committee at Fort Jackson, SC, where he taught Korean-type night tactics to new recruits. Later that year he married Joyce Karen Tisdale of Andrews, SC. Joyce was a 1950 graduate of the Roper School of Nursing through the Medical College of South Carolina and a registered nurse at Georgetown Memorial Hospital, Georgetown, SC. Rivers and Joyce had three children: Deborah (Debby) Karen, Howard R. III (Skip), and Scott Risher Jacobs.

Released from active duty in 1954, Rivers joined his father in the photofinishing business, expanding it into a full-service color and black-and-white plant with five locations in Charleston. He served as president of the Photo Marketing Association of Dixie and as national southern region vice president. He was listed in "Who's Who" in the national photo marketing magazine in recognition of his leadership in promoting the highest quality of film processing. He succeeded his father as company president in 1974. Remaining active in the US Army Reserve, he completed the Command and General Staff College course at Fort Leavenworth, KS.

Rivers was active in church and civic affairs. He taught church school and served on vestries and other committees for over thirty years at St. Peter's and Old St. Andrew's Episcopal churches. He was senior warden at Old St. Andrew's in 1969 and a trustee at Porter-Gaud School for eight years. A lifetime member of Disabled American Veterans and The Citadel Alumni Association, he was an avid sportsman, particularly football, hunting, and fishing.

Rivers was preceded in death on June 11, 2006, by his loving and devoted wife of fifty-five years, following a long illness. He is survived by his loving children and their very close families: Debby (Gene), Skip (Leslie), and Scott (Kathy) and four wonderful grandchildren: Hannah, Katie, Emily, and Luke. Relatives and friends are invited to attend the Rite of Christian Burial at 11:00 Saturday, March 7th at Old St. Andrew's Parish Church, followed by committal in the parish graveyard and a reception in the parish house. In lieu of flowers, memorials may be made to Old St. Andrew's Parish Church, 2604 Ashley River Road, Charleston, SC 29414.

To order memorial trees or send flowers to the family in memory of Howard Rivers Jacobs, Jr., please visit our flower store.