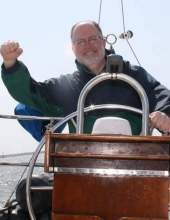 James “Jim” Jackson Goolsby, Jr., 62, went to his eternal rest on Sunday, August 18, 2019, in Summerville, SC, after a short and valiant battle with pancreatic cancer.

He was born on July 16, 1957, in Las Vegas, Nevada, son of Janet Ann Goolsby and the late TSGT James Jackson Goolsby, Sr.

Jim (aka “Planet Jimbo” to his friends, or “Jimmy” to his immediate family) was raised in the Charleston area. Jim was retired at the time of his death. He was a graduate of R.B. Stall High School, attended classes at the College of Charleston, and was a lifelong student . . .and vocal proponent or opponent . . . of all things music, literature, movies, sports, politics and people - as anyone who has ever played Trivia with him can firmly attest. An avid and voracious reader all of his life, Jim taught himself how to read at the age of three using a family dictionary - a fact that should surprise no one that knew him. Jim was also a self-taught musician (guitar) and song-writer from an early age. We all know Jim is now jamming with some of the greatest musicians in Heaven, or having a heated political discussion with the likes of Socrates or Plato. Jim fiercely loved life, his family and friends, and his beloved Cindy, with whom he desperately wanted to grow old. The greatest pride and joy in Jim’s life, however, was his daughter, Annie (aka “Small World” to his “Planet Jimbo”), of whom he will be eternally proud.

Right before Jim passed away, when he could still talk, he said “it’s not goodbye; it’s just until we see each other again.” What a quiet world this is going to be until that moment arrives.

Jim’s Celebration of Life will be Friday, August 23, 2019, at the gazeebo in Hampton Park from 6:00 PM – 8:00 PM. There will be food, iced tea and water provided. Everyone is encouraged to bring chairs, blankets and coolers.

The family has requested that attendees wear bright colors. Superhero shirts are especially welcome, alternatively Red Sox, Harry Potter or character shirts, but NO BLACK (unless it is Darth Vader or Batman).

This event is going to be an excellent time to share laughs, tears and memories. We will support each other and remember our unique place in the world of Planet Jimbo.

In lieu of flowers, the family has requested donations to the Pancreatic Cancer Action Network at Pancan.org.