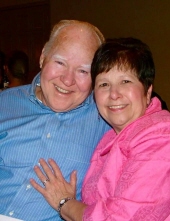 John “Jay” W. Brown, Jr, 81, went to be with the Lord on Sunday, July 14, 2019 at the Roper St. Francis Hospital in Charleston, SC following a long battle with Idiopathic Pulmonary Fibrosis. His devotion to his family and his firm belief in God supported him in his struggle and ultimately gave him peace.

He leaves his wife of 52 years, Marie (James) Brown; his daughters, Daphne Marie Bockenstedt and her husband, Bret Bockenstedt, Lisa Jaye Brown, Donna Brock and her husband Don Brock,; 6 grandchildren, Vivian, Bailee, Bowen, Ben, Bryson, and Braxton; Two sisters, Bonnie Leggio and her husband Frank Leggio, and Blanche Johnson; two nephews Frank Leggio and Michael Leggio, and one niece Rhonda White; and countless friends. He was born on December 3, 1937 and raised in Charleston, SC, the son of John W. Brown Sr and Beulah (Fisk) Brown. A special thanks to Phyllis Reyes for the all love and support.

After serving with the US Air Force, Mr. Brown returned to Charleston to work at the Naval Shipyard as a nuclear instrument mechanic. He met the love of his life, Marie James, on a blind date and they were married in 1967.

Mr. Brown was well known for giving away hand made key chains to just about anyone he met. He loved his wife, t-bone steaks, and the Lord. Not necessarily in that order. He hated coffee and sweet potatoes. He had a great sense of humor and made many people laugh (or cry) depending on his antics. He was well-loved by his church family, blood kin, and countless friends who celebrate that he is with his Creator.

Memorials can be made to James Island Baptist Church, 2023 Wappoo Drive, Charleston, SC 29412.