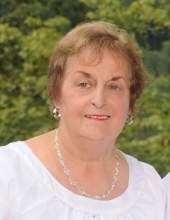 Marianne T. Ezman passed away peacefully in her home on October 12th, 2019, at the age of 77.
Marianne was born and raised in a small Polish community in Dickson City, Pennsylvania. It was there that she married her high school sweetheart and earned her certification as an x-ray technologist. She then moved to Detroit, Michigan, and later Youngstown, Ohio, where she raised her four children.
On the heels of the birth of her first grandson, she and her husband Al moved to Charleston, SC, where they enjoyed the remainder of their 58 years of married life together.
Marianne, aka “Grammy,” was a loving and devoted wife, mother, and grandmother, and words cannot express the depth of her warmth, beauty, and strength that accompanied everything she did for her family. She was a wonderful cook and baker and enjoyed crocheting special quilts for her family and friends. She enjoyed flowers, holidays, cheering on her grand kids in all of their endeavors, and lately, bird watching in quiet conversation with
Al on the back porch. Marianne was a devout Catholic who had an affection for our Blessed Mother, Mary. She would call upon Mary daily through her rosary meditation, asking for God’s love and protection for all those close to her.
Finally, the Dallas Cowboys did not have a bigger fan!
She is survived by her loving husband Al Ezman of Mount Pleasant, SC and their three children; Dr. Alfred Ezman (Deneen) of Gaffney, SC, Dr. Lori Ezman (Dr. Gordon Thompson) of Mount Pleasant, SC, and Mr. Brian Ezman (Darlene) of Madison, WI. She leaves nine grandchildren to cherish her memories; Rohan and Sawyer Thompson, Alfred, Nikolas, and Charly Ezman, and Jaxson, Rylan, Wyatt, and Emmalyn Ezman.
She was preceded in death and is now reunited with her beautiful daughter Cheryl Ezman.
A Mass of Christian Burial will take place Saturday, November 16, 2019 at 11 AM at Stella Maris Catholic Church, 1204 Middle Street, Sullivan's Island, SC, 29482.Inurnment to follow at Mepkin Abbey.
Memorials may be made to Project Hope Autism Foundation on behalf of Nikolas Patrick Ezman, 751 East Georgia Street, Woodruff, SC 29388.
Arrangements entrusted to McAlister-Smith Funeral Home, Mt Pleasant, 1520 Rifle Range Road Mt Pleasant, South Carolina, 29464, 843-884-3833.
To order memorial trees or send flowers to the family in memory of Marianne T Ezman, please visit our flower store.