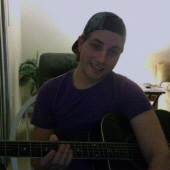 Michael Gene Morris, 22, of Charleston, SC, transitioned from life on earth, to start his next journey, on Sunday, November 6, 2016. He was born on Wednesday, September 14, 1994 in Waukegan, IL to Lynn Timm Morris and Travis Morris. From a very young age Michael had a love for music. As a toddler we often found him climbing on top of laundry basket with his microphone singing â€œGrandma loves baconâ€. As he got a little older, he could be found standing on a real stage performing his own show while his Dad was taking a break during his Elvis tribute show. As a young adult, Michael decided he wanted to learn how to play the guitar and successfully taught himself how to play beautifully. His love of music was something that helped him connect with family and friends and was a wonderful way for him express who he was as well as expose his tender heart to those he loved. Michael graduated high school in 2013 as a Certified Electronics Technician Associate from the Delaware Area Career Center in Ohio. He enjoyed learning the hands-on trade even though he realized that career path was not his true calling. In recent years Michael realized his calling was in healthcare or psychological care and looked forward to a career in nursing or youth counseling. Michael is preceded in death by his Grandpa, Teddy Wayne Morris; and hisGrandpa, Edward W. Timm Sr. He is survived by his parents: Lynn Timm Morris of Charleston, SC and Travis Morris of Racine, WI; sister, Dana Morris of Delaware, OH; his nephews: Jimmi Logan Morris, Xander Todd Gray and Bentley Dean Gray; Grandma, Joan Timm and Grandma, Nora Morris; several Aunts, Uncles, and Cousins. Michael leaves behind many friends in Illinois where he was born and went elementary and middle school, Ohio where he spent his high school years and young adulthood and South Carolina where he spent his final year. A memorial service will be held on Sunday, November 20, 2016 at 4:00 PM, with visitation prior to the service from 3:00 PM until the time of the service at Crossroads World Outreach Center located at 2606 Emanuel Church Road, West Columbia, SC 29170. Expressions of sympathy may be viewed or submitted online at www.mcalister-smith.com Arrangements have been entrusted to McALISTER-SMITH FUNERAL HOME WEST ASHLEY CHAPEL, 2501 Bees Ferry Road, Charleston, SC 29414, 843-722-8371.
To order memorial trees or send flowers to the family in memory of Michael Gene Morris, please visit our flower store.