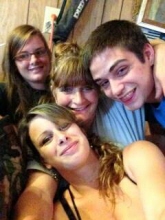 Renee Susan Summey, 45, of North Charleston, died March 25, 2015. Born in Champaign, IL, she was the daughter of the late Robert Wilcox and Diane Hill Williams and wife to Jeffrey Summey. Renee worked as a waitress and enjoyed cooking, cleaning and gardening. She had a love for swimming and being on the water. She is survived by her two daughters, Ashley Ratliff and fiancÃ© Phillip of North Charleston and Macy Stokes of Cottageville; son, Charles Little of Summerville; husband, Jeffrey Summey; sister, Rae Bowles of Ladson; brother, Robert Wilcox, Jr. of West Ashley. Renee is also survived by her grandchildren, Holland Howard, VII, Landon Mallard and Jack Henry, her nieces and many close friends. Graveside service will be held Wednesday, April 1, 2015 at 1:00 p.m. in Holy Cross Cemetery, James Island.
To order memorial trees or send flowers to the family in memory of Renee Susan Summey, please visit our flower store.