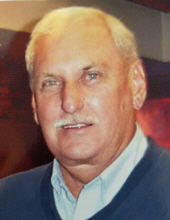 Richard William McDaniel, 78, of Charleston, South Carolina, passed away May 24, 2019.
He was the husband of Gayle Cochran McDaniel.

Born on September 17, 1940, in Charleston, South Carolina, he was the son of Ruric Nevil McDaniel and Beulah Evelyn Sitler. He served in the U.S. Army and worked 28 years at the Charleston Naval Shipyard as Shop Foreman/Supervisor in the Sheet Metal Shop No. 17.

Richard enjoyed fishing, hunting, and was an avid golfer and a founding member of The Wild Bunch at Shadowmoss Plantation Golf Course. He was also a member of The Elks Lodge No. 242 and a former long-time member of the American Legion Post 179.

A celebration of Richard’s life will be held at Shadowmoss Plantation Golf Course on Wednesday, June 5, 2019, at 6:30 p.m. All his friends are welcome.

In lieu of flowers memorials may be made to The First Tee of Greater Charleston, 321 Wingo Way, Ste 201, Mt. Pleasant, SC 29464, or go online to their donation page: https://www.thefirstteegreatercharleston.org/ways-to-give/donate-c/

Richard will now be teeing it up every Saturday morning with The Ark Angels.
To order memorial trees or send flowers to the family in memory of Richard William McDaniel, please visit our flower store.