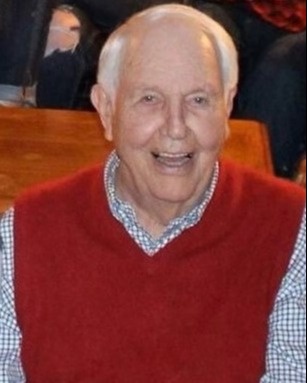 Tom was born in Arlington Heights, IL on January 2, 1935, to the late Clifford and Elsie Moore. At age 14, his family moved to Twin Lake, MI, where he attended Muskegon High School and played on the varsity football team. In his Junior year, the Muskegon "Big Reds" won the State Football Championship and were later inducted into the Michigan High School Sports Hall of Fame.

Tom attended Michigan State University and acquired a Bachelor of Science degree in Packaging. There, he was a member of the ROTC and later served in the Air Force as a Second Lieutenant. In 1969, he co-founded Electro-Matic Products, Inc. in Farmington Hills, MI, wherein he resided and raised his family with his former wife, Leona Moore. He helped successfully build Electro-Matic into a thriving business and ultimately retired and presided on the Board of Directors. Tom enjoyed all sports and was a long-time football and basketball season ticket holder for his beloved Michigan State Spartans.

In October 2021, Tom and his wife, Julie Moore, permanently moved to their Seabrook Island, SC home. Tom enjoyed playing golf and tennis and spending time with his family and friends.  He was an avid reader and will always be remembered as a kind and generous man with a big personality. Tom was also a dedicated supporter of numerous charitable organizations, including the Michigan State Spartan Fund, Building Beds 4 Kids, Water Wellness Mission, and other family endeavors. He will be sorely missed by many friends and family members.

In lieu of funeral services, a Celebration of Tom's Life will be held and announced at a later time.

To order memorial trees or send flowers to the family in memory of Tom Clifford Moore, please visit our flower store.