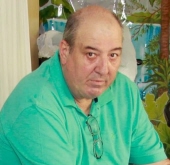 William Stanley Klaiber, 66, of Ladson, died February 10, 2016. He was born October 6, 1949 in Buffalo, NY to the late George and Phyllis Klaiber. After Bill graduated from High School, he entered the United States Navy. He served aboard the Henry L. Stimson and the Nathan Hale with the B crew; and also was an instructor for the Naval Training Center in Charleston. He met his wife, Tricia, while he was visiting Maryland and the two soon began life in South Carolina. He retired from the Navy and started a career as a Branch Manager for W & O Supply. His family will remember him as a loving man and how much he enjoyed fishing. Survivors include his wife of 40 years, Patricia Klaiber; sons Robert and Jason Klaiber of Summerville; sister, Janice Haynes of Ridgeville; step-brother, John (Joy) Wackerman of Alpharetta, GA; grandchildren, Sean Schattner, Robert Klaiber Jr. and Trevor Nicholas Klaiber; great-grandchildren, Madison and Joseph Schattner; nieces and nephews, Janine Kennedy, Jessica Wackerman, Wayne and Brian Thomason; and many other loving family members and friends. The family invites friends for a visitation on Sunday, February 14, 2016 at 12:00 pm - 2:00 pm at McAlister-Smith Funeral Home, Goose Creek Chapel. A celebration of life will be held immediately following. A private burial will be held at a later date at a National Cemetery. Flowers are accepted, however, memorial contributions may be made to the St. Judeâ€™s Childrenâ€™s Hospital or charity of your choice. Expressions of sympathy may be viewed or submitted to www.mcalister-smith.com Arrangements entrusted to, McALISTER-SMITH FUNERAL HOME, 869 ST. JAMES AVENUE, GOOSE CREEK, SC 29445.
To order memorial trees or send flowers to the family in memory of William 'Bill' Klaiber, please visit our flower store.