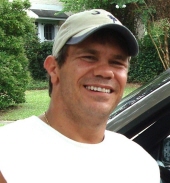 To all: On the evening of Saturday December 19th 2015, William (Willy) Earl Gatch entered into eternal peace, at his residence. Willy was born on September 4th 1968 in the city of Charleston, SC to Patricia Morris Gatch and the late Howard Lee Gatch Jr. He was co-owner of Gatch Builders, LLC. William was known for his charismatic Southern Charm and Infectious smile. He was a kind hearted soul and loved his family deeply. After High School he became master carpenter and licensed builder. When he was not working, he loved football, baseball, boating and the beach. Besides his mother, William is survived by his son, Ryan Berry Gatch; a brother, Howard lee Gatch III; a sister Brandy Gunter; 3 nephews, Tallon Lee Gatch, Mason William Gatch and Karl Ilich. A celebration of his life will be held on Sunday, December 27th, 2015 at 4pm at McAlister-Smith Funeral Home, James Island Chapel. The Family will receive friends following the service until 6pm. Burial will be at the family cemetery in Cottageville, SC at a later date and will be laid to rest beside his father. Memorial contributions can be made to the family or www.gofundme.com/williamgatch that has been set up to help pay for the funeral expenses and thank everyone for all they have done.
To order memorial trees or send flowers to the family in memory of William Earl 'Willy' Gatch, please visit our flower store.