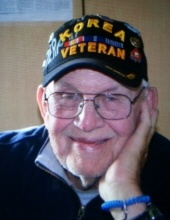 Born on May 10, 1928 in Rahway NJ, William was a son of William I Eckert and Irene (Langstaff) Eckert.

William (Bill) took great pride in his service to his country as a United States Marine. After his honorable discharge from the US Marine Corp. Bill went to work for Otis Elevator in New York City and Nutley, New Jersey. This is where he met and married Marion (Carlson) Eckert (Deceased 1995). The couple then moved to Montville, New Jersey and Bill began his career as a Safety engineer for Clay Adams and Becton Dickinson where he continued to work until retirement. Bill couldn't sit still so he then got his plumbing license and started his own Plumbing business until moving to South Carolina in 1991. His life was filled with many years of volunteering and service to the community. Bill was a proud member of the Towaco Volunteer Fire Department. He also served on the Montville Township Board of Education (as a member and then president) and also sat on the board of Lord Stirling School in Basking Ridge. Additionally Bill served as President of the Parsippany Chamber of Commerce.

He served as a volunteer at the VA in Charleston, SC. One of his favorite volunteer activities was that of working at Camp Happy Days, a camp for children battling cancer. Bill was also a proud member of the Knights of Columbus and the American Legion. A devout Catholic, Bill was a regular parishioner at St Andrews. Bill had a zest for life and enjoyed many hobbies and interests: football, woodworking, fishing, camping, skiing, traveling, riding his motorcycle, going out for a good steak dinner, smoking his pipe with a good cup of coffee... and of course ...golf. He lived his life as described in the song by his favorite artist Frank Sinatra ..." I did it MY WAY."

A memorial service will be scheduled at a later date.

In lieu of flowers, memorial contributions in William's memory may be sent to St Jude's Children's Hospital.

Expressions of sympathy may be viewed or submitted online at www.mcalister-smith.com. Funeral arrangements have been entrusted to McALISTER-SMITH FUNERAL & CREMATION, West Ashley, 2501 Bees Ferry Rd, Charleston, SC 29414, (843) 722-8371.
To order memorial trees or send flowers to the family in memory of William H Eckert, please visit our flower store.